Not all shots are equal. While you get 2 points for both a breakaway dunk and a tightly guarded, off-balance 20 foot jumper, the dunk is the more valuable shot because it is going to be made nearly every time. Multiple people have created shot quality models to estimate the probability a shot is made based on various factors. You can read about some of them here and here . The better public models all used the no longer public SportVU shot logs. Now the models that use factors like closest defender distance and touch time, like ESPN’s Quantified Shot Quality(qSQ), are proprietary and not readily accessible.

While shot level data is no longer available for some of these important features, there is still a lot that can be gleaned from play-by-play data. With play-by-play data we can figure out, for each shot, how the possession started, the time since the possession started and the location of the shot. Using these features we should be able to create a model to estimate the probability of each shot being made that does better than using only shot location. My goal in building my own model is to create a shot quality metric that is easily available for anyone to look up on PBPStats for all the possible queries and filters. While you can get shooting stats by how open shots are on stats.nba.com , it’s not easy get those stats beyond the season-level. While this model may not be as good as some of the proprietary models, by adding in features from play-by-play data, it is better than what is publicly available and easily accessible. The model output on PBPStats can be found on the Scoring and Shooting tabs and can be interpreted as an expected effective field goal percentage based on shot location and play context.

What is included in the model:

What is not included in the model:

Each season has a different model that is trained using the shots from the previous four seasons. Each model is an ensemble model of two gradient boosted tree models using XGBoost and CatBoost . I tried including other models in the final ensemble model but none of them improved the overall model performance. 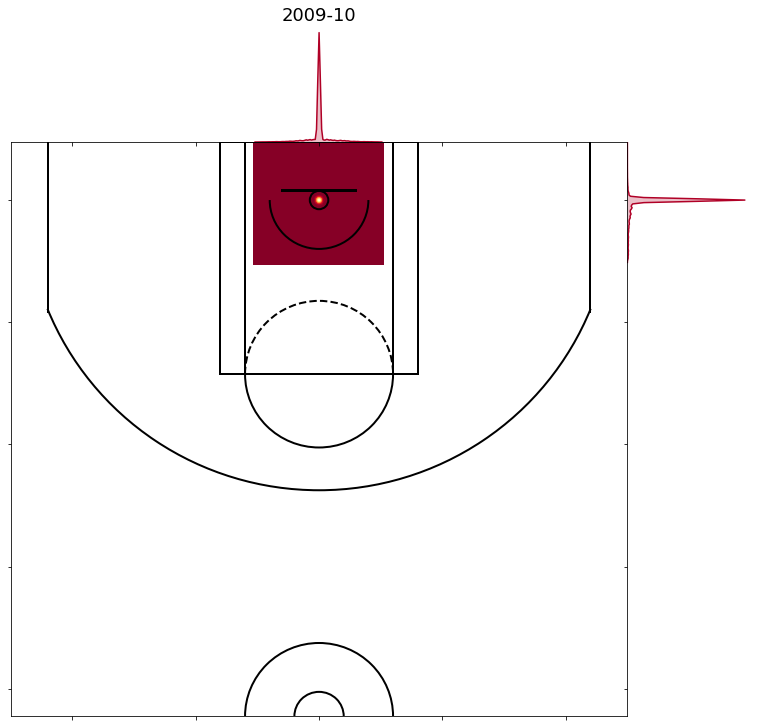 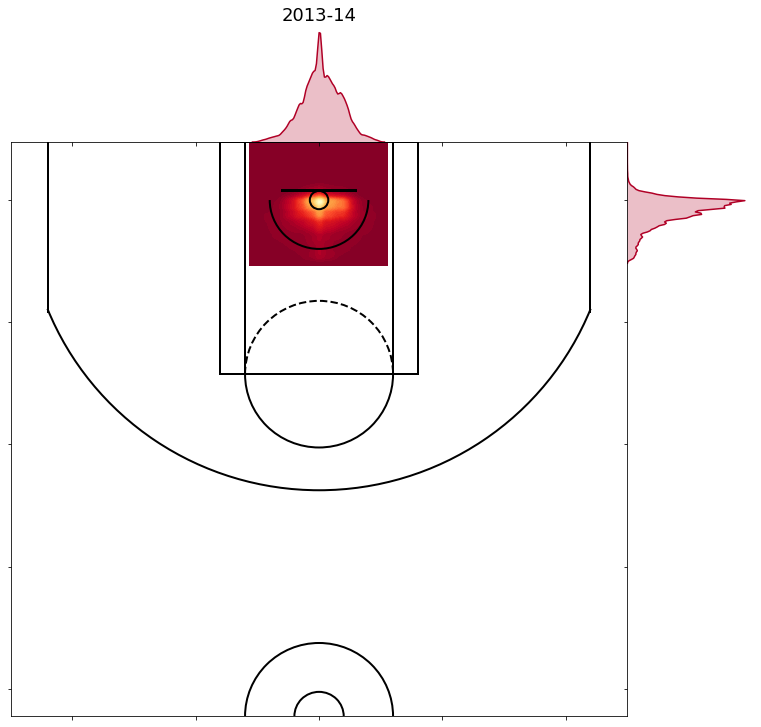 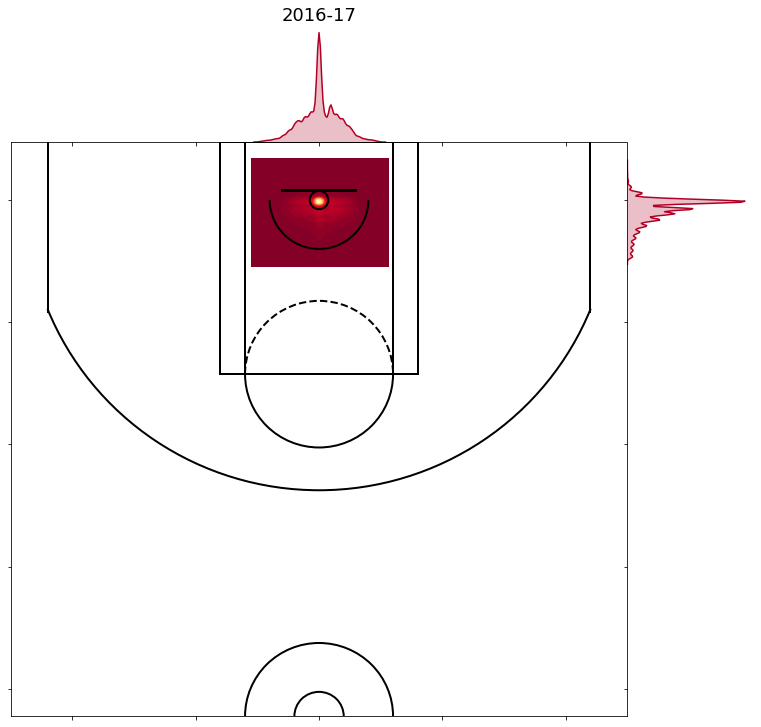 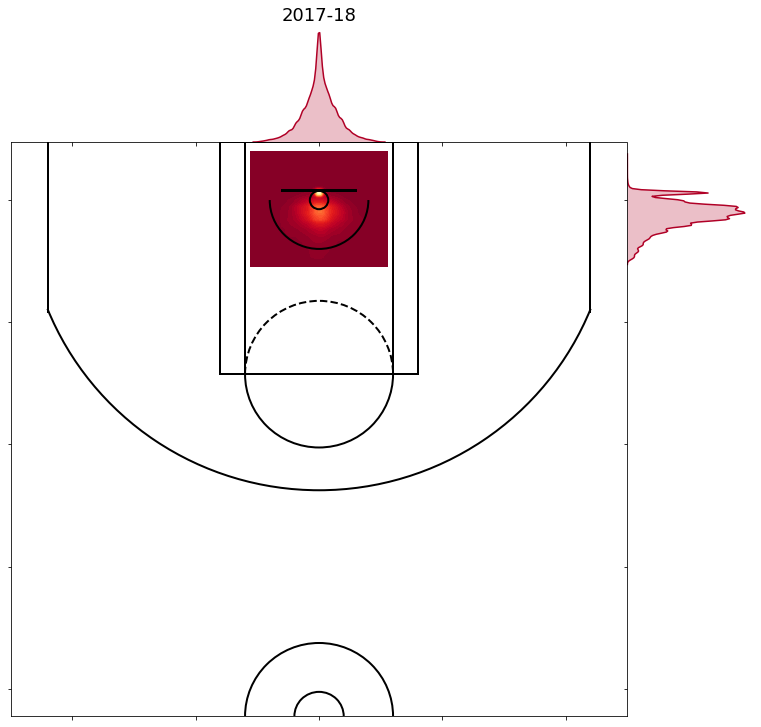 As a result, it makes it difficult to get a good prediction in years where the model was trained on data that has labeled the coordinates of shots at the rim in a different manner. I tried smoothing out some of the common points and rather than having them all at the centre or back of the hoop, randomly placing them anywhere in the hoop. This improved the model predictions for the 2017-18 season so the final model uses the smoothed points for that season but not for any other seasons. I’m guessing that the 2018-19 season data will resemble the 2017-18 season data, so no adjustments were made training the 2018-19 model.

A common criticism of tree based models is that you are sacrificing interpretability for prediction accuracy. Fortunately a newly developed tool called SHAP values allows us to better interpret these models without sacrificing accuracy. If you want to read more about SHAP Values you can read up on them here , here or here .

Here are some SHAP value summary plots, along with how to interpret them, for each model for 2017-18. 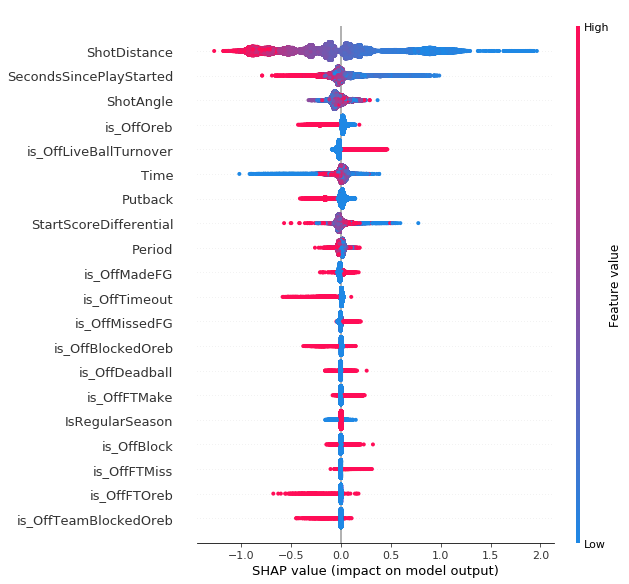 Each point is a single shot. Pink points represent a higher value for that feature. Points to the right represent a higher SHAP value which corresponds to an increased probability of making the shot. They are ordered top to bottom from most important to least important. Not surprisingly, shot distance is the most important feature - the closer to the hoop, the higher the probability of making the shot. Looking at the chart below, you can see that the magnitude of the importance of shot distance is by far the highest. I found it interesting that shots following offensive rebounds (“isOffOreb”) tended to have negative SHAP values. My guess for the reason for this would be that compared to normal shots at the rim, shots after offensive rebounds are probably more closely guarded. Also all the missed tip-in attempts when a player can’t get two hands on a rebound probably bring down the value of putback attempts. This doesn’t mean these shots are bad shots, it just means they aren’t as good as some other shots in the restricted area. 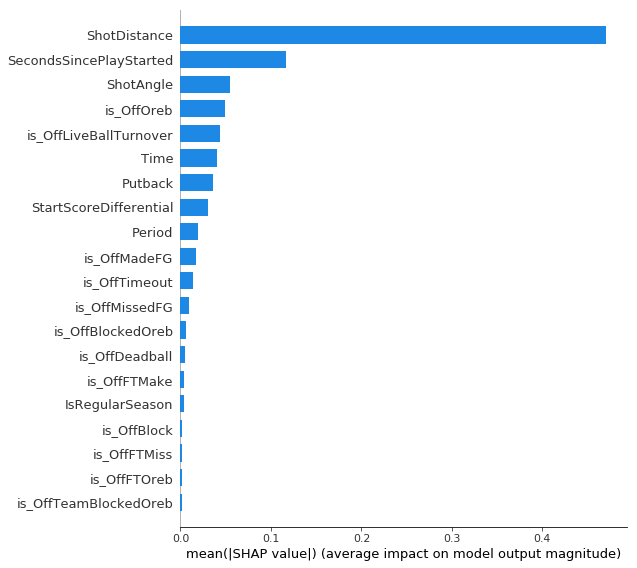 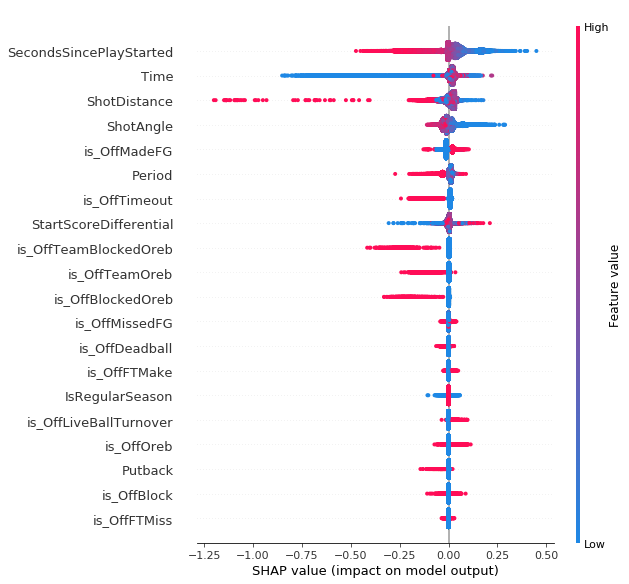 For two point shots outside the restricted area the number of seconds since the play started is the most important feature, even more important than shot distance. My guess would be that this picks up some of how open the shot is, as well as who the shooter is. Shots early in the shot clock are probably more likely to be open and more likely to be taken by better shooters. Time remaining in the period is second most important, probably due largely to the low value end of quarter shots. 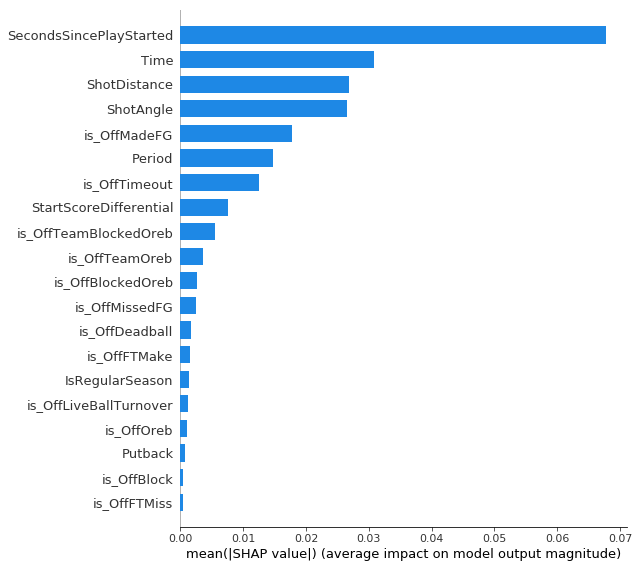 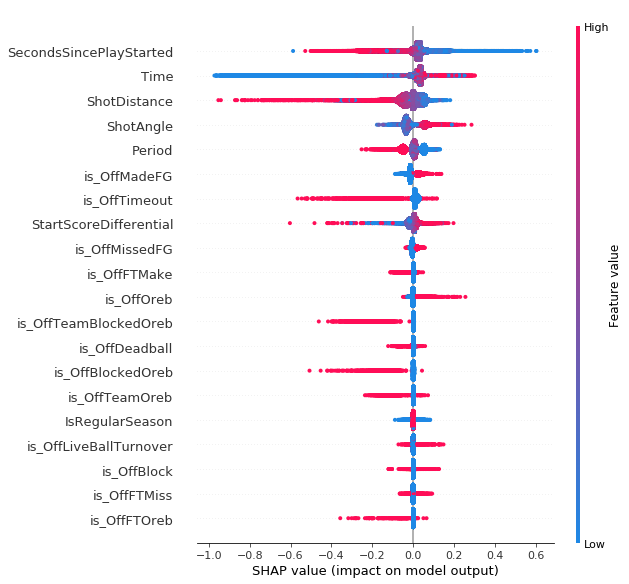 On three point shots the number of seconds since the play started and the time remaining in the period are the two most important features, just like for two point shots outside the restricted. Shot distance and shot angle are next. The closer/higher angle threes are corner threes and lots has been written about how corner threes are more valuable than above the break threes, so these results are expected. Period is the next more important with shots with high values (overtime) having negative SHAP values. This lines up with conventional wisdom that as your legs start to get tired you won’t shoot as well on jump shots. Although the magnitude is small shots after offensive rebounds tended to have positive SHAP values. This is also probably picking up openness to some degree. 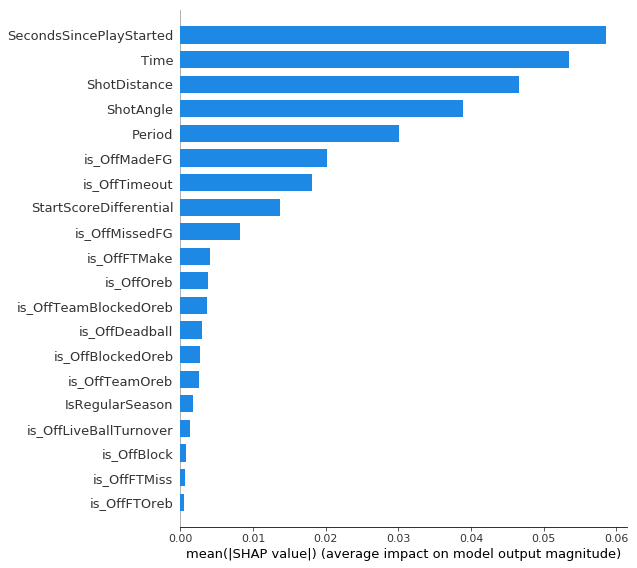 So in general, even though openness isn’t in the model it is probably being picked up to a small degree based on the number of seconds since the play started and, to a smaller extent, the play context. It is also important to note that one of the shortcomings of SHAP values is dealing with features that are highly correlated. For example, when I look at all the three point shots with the highest probability of being made, nearly all of them are shots 1-2 seconds after an offensive rebound. It would be hard to get a three point attempt 1-2 seconds after any play start type other than an offensive rebound. This makes it tricky to properly “credit” the time since the play started or the play starting off an offensive rebound.

In terms of the actual model output, looking at the team stats for shot quality in 2017-18 and seeing Houston at the top of the list and Minnesota and Sacramento at the bottom is reassuring. On the defensive end seeing Utah number 1 and Phoenix number 29 passes the smell test as well.

Comparing to Model with Defender Distance

Since there was a time when there were more detailed shot logs with defender distance that were publicly available, I also built a model using that data. It was trained on data from the 2013-14 and 2014-15 seasons and tested on the half season of 2015-16 data that was available and it uses all the same features as this model along with closest defender distance and number of dribbles. Here is how that model performed:

Perhaps splitting up the models even further - for the three point model, split up corner and above the break threes and for the non-restricted area model splitting up shots from floater range and long twos is worth exploring to see if it improves the model. Adding in the defensive players on the floor to account for the strength of the defense could also make things better.

Inspired by the openness of Manny Perry of Corsica and Evolving Wild in sharing their data/code for their hockey research, I’m sharing the data and code used to make this model. Here are links to notebooks so you can recreate everything I have done from scratch yourself if you are curious or want to build your own, better, model. The data cleaning notebook has a note on how to get the data.