“The analytics say that’s a bad shot” is a phrase you will often hear during NBA broadcasts when a guy like Kevin Durant or Chris Paul pulls up from mid-range, often accompanied by a lament that analytics have resulted in the “death of the mid-range” or the “lost art of the mid-range” (Side note: analytics don’t say anything, people do, and often when that phrase is said by TV analysts it is often not something people who actually do basketball analytics would agree with). Based on the commentary, you would think that the elite scorer getting to his spot and shooting from mid-range is a shot that is getting taken out of NBA shot profile. While it is true that mid-range attempts are way down, the shots that aren’t being taken anymore are mostly assisted mid-range shots. Unassisted mid-range shots, which is what I would think most people would classify as “the art of the mid-range”, have had very little change in how often they are taken since tracking data became publicly available.

If you watch a game from the 2013-14 season, the first season for which we have detailed tracking stats available publicly, I think one of the main differences you will notice is how many more teams had guys spotting up or coming of screens just inside the three point line for catch-and-shoot jumpers. Now these catches almost always come behind the three point line. If we look at how shot frequencies by number of dribbles have changed in the tracking data era, this trend is clear. I split up two point shots from outside 10 feet by 0 or 1 dribble (largely assisted shots) and 2+ dribbles (largely self-created shots) and charted the frequencies below to see how they have changed over the last several years. 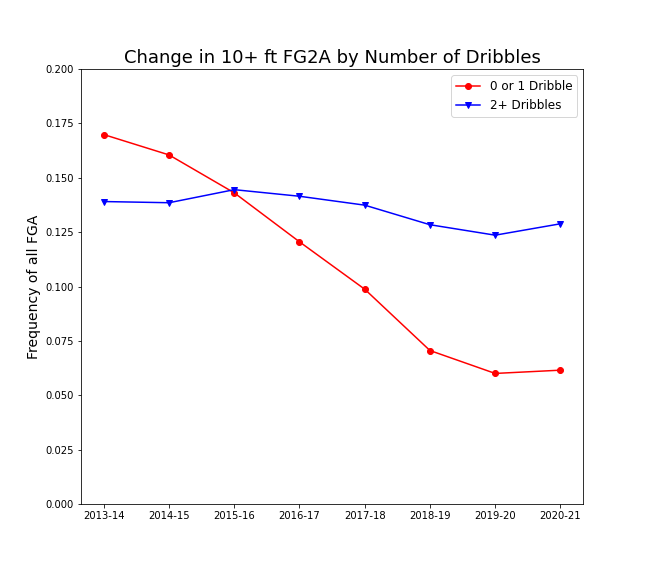 The shots that are disappearing are not the shots by guys creating for themselves and pulling up from mid-range. The shots that are disappearing are the spot-up jumpers from just inside the three point line, largely taken by bigs and low-usage wing players. Teams have realized that not just do they get a higher expected value on the individual shot when these players take a couple steps back and shoot from behind the three point line, but the additional spacing provided by the defenders needing to cover that extra few steps opens up the floor for everyone else. The mid-range shots that still have value are the shots by the elite high usage scorers, which is why the frequency of those shots has not changed much.